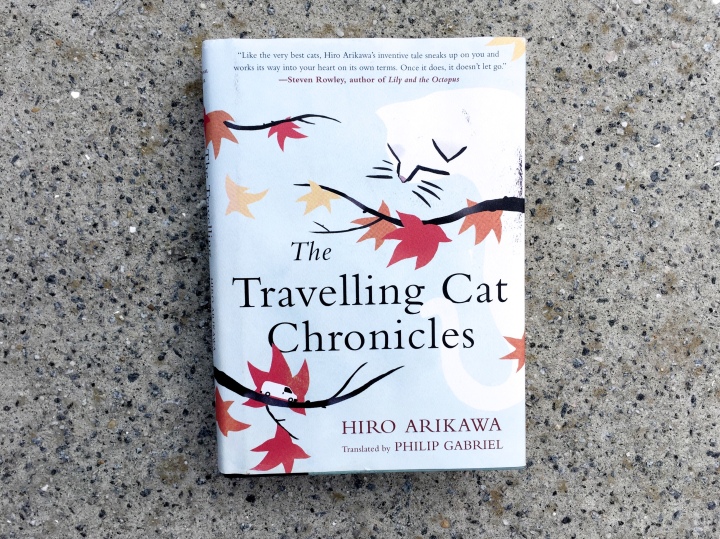 A lot of Japanese authors and their novels have crossed my path lately, and The Traveling Cat Chronicles by Hiro Arikawa is one of them. It’s inviting cover and petite size suggest a light easy read, but this tiny book is packed with humor, emotion and a heartwarming journey.

Set in Japan, Arikawa weaves a story of companionship and forgiveness and the invisible strings that tie us together. The story is centered around a man named Kosuke and narrated by Nana the stray cat who finds himself Kosuke’s grudging, but loyal companion.

Kosuke, we learn, is a young man who has experienced tragedy and much transition in his life. When he finds Nana lounging on his van’s hood, Nana reminds Kosuke of a cat from his past. He patiently woos Nana and they develop a mutual respect for each other. One day Kosuke sets out on a mission to find a new home for Nana––for reasons we don’t learn until much late––and Kosuke beings a journey revisiting people from his past.

Nana is an intuitive being. He knows that Kosuke doesn’t really want to give him up so he thwarts Kosuke’s every attempt. As Kosuke visits old friends hoping they will take his cat in, we travel back in time to when and how Kosuke first met these individuals and learn of the impact he had on their lives and they on his.

How Did I Hear About This Book?

This was another random buy at the book store. It was sitting right there by the register when I went to check out with a few other books. I’m so easy for store marketers. Yes, I also buy the random stuff hanging up between shelves at the grocery store.

Did The Opening Pages Draw Me In?

Intrigued by this sly, arrogant narrator, I enjoyed reading about the circumstances by which Nana met Kosuke and how he, a stray cat, agreed to live with Kosuke as a pet.

What Kept Me Reading?

In the following chapter, the author advances five years to when Kosuke must find someone else to take Nana in. Of course, I wanted to know why he needed to find a new owner! Not only that, but the stories that unfold as Kosuke visits his childhood friends are touching and reveal much about Kosuke’s character and how he affected the lives of all he came to know.

How Predictable Was The Outcome?

Well, I can’t say I was all that surprised, but the getting there was heartwarming and funny. Nana has quite a sense of humor.

Sure! The Traveling Cat Chronicles is a delightful read; poignant, yet hopeful. Pet lovers, especially cat lovers, are sure to enjoy it. I am not a cat lover, yet I enjoyed it very much.

I love the subtleties in this novel. The things that are left unsaid speak just as loudly as the words on the page. The tender story of love between a pet and its owner, the connections people make past and present, the misunderstandings that we carry with us over the years … it is all here in The Traveling Cat Chronicles.

Had a great time seeing Oprah and her 2020 vision crew in Charlotte. Laila Ali was amaaaaaazing. #oprahs2020visiontour #oprah #charlottespectrumcenter #lifeinfocus
Perfect spot to sit for a minute while my son shops for me for Christmas. He’s 7 and has a budget of $10, but he found something he knows I’m gonna love and he’s right, of course! We were shopping for his brother, but he wanted to stop in Amity because he said he saw things that were my style. 😂 Duck is my favorite place to do Christmas shopping. This time of year it’s quiet and intimate and just what I need. #shopsonthewater #ducknc #obxlife #christmasshopping
I was not sure this would be as good as her first novel, The Song of Achilles, but it was! In my opinion, it’s even better. I am enamored. #circe #madelinemiller #myth #mythology #mythicalcreatures #witches #mothers #motherslove #books #bookstagram
Sitting in a coffee shop in old school theatre seats and working on my WIP. Actually, working on backstory. How important is backstory to you? I thought it wasn’t that important. I would do character development about who my character is now and, of course, how she changes throughout the story, but I never considered how important it is to know why she is the way she is now. What made her this way? Obviously, there was some important moment that gave her her world view, her point of view. A lot of writers work this out while they are writing, including myself, but I can see the benefit, now, of doing this before you start chapter one. It will save a lot of unnecessary words. Or before you go back to revise the first draft or the fifth. This is important information. Why does she have this viewpoint? Why does she believe what she believes? #amwriting #amediting #womensfiction #nanowrimo #novelist #fictionwriter #muddywaters #muddywaterscoffee #elizabethcity
This memoir is an emotional roller coaster. Disbelief, sadness, fear and outrage, alternatively. #amreading #educated #tarawestover #tarawestovereducated #memoir #bookstagram #bestbooksof2018
Leave it to me to find the best alley in a 50 mile radius. #elizabethcity #pailinalley #ghostharborbrewingcompany #ghostharbor #nc #albemarlenc